UMPC / Netbook style PC’s have had a recent resurgence  from newer incumbents with devices like the Pocket from GPD and the OneMix 2s / 3x series of devices. Recently one of the older Chinese device makers Chuwi released their own UMPC variant, the Chuwi Minibook. 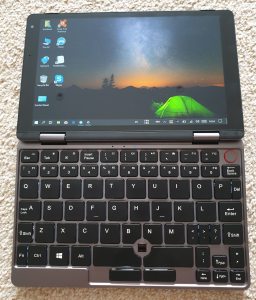 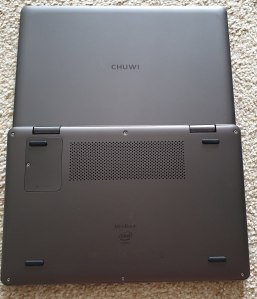 There are various configurations available for the Minibook:

Note that unlike the GPD / OneMix variants the things that stand out here are the backlit keyboard, the front facing built in camera and the fingerprint sensor. 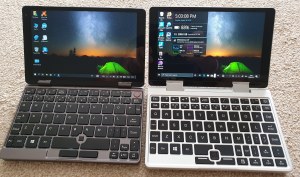 I tested the N4100 variant and in general I was impressed with it. It has a 360 degree hinge so can flip into tablet or tend mode, it’s screen is very bright, it’s reasonably fast and the keyboard was half decent (better than the Topjoy Falcon but not as good as the OneMix 3s), the tracking nub is OK but I would have preferred a Thinkpad style nipple, but, and its a big ‘but’, the buzz from the fan was just way too loud, to the point where I could not conduct Skype calls because of the sound of the fan. People complained on the other end that they could not hear me properly.

There is a BIOS update available that makes this a a little better. Post the BIOS upgrade, the Thermal Design Power (TDP) is reduced which results n the  CPU running slower and therefore the temperature being lower and the fan not kicking in as often. The OneMix and GPD devices have fan control accessible from the keyboard so this does not feel like a solution. Its a pity as it spoils what potentially is a very nice device.

Other Tips and Tricks:

Given the amount of UMPC style devices now around means there is now some serious competition for a users $$. On the plus side the Minibook has a backlit keyboard, a camera and a fingerprint sensor which makes it fairly unique in the 7-8″ UMPC laptop range, however there are issues with the fan noise, but to be fair all the UMPC devices currently in the market have their own idiosyncrasies. Perhaps Chuwi will orchestrate a better fix for this with a future update but in the meantime if you are looking for a UMPC style laptop this is definitely something to be aware of.

This site uses Akismet to reduce spam. Learn how your comment data is processed.